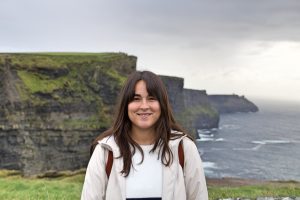 Graduated in Biology from the University of the Basque Country. After a year of specialization in Marine Biology and a final thesis in the department of Marine Ecology of the University of the Azores (Portugal) on the impact of artificial structures on the recruitment of a species of barnacle on the island. She started the International Master in Marine Biological Resources (IMBRSea), an international master’s degree in which collaborate several European universities .

Her master’s course started at the University of Algarve (Portugal) and the University of Ghent (Belgium). During this year she also did an internship at the Royal Belgian Institute of Natural Sciences (RBINS) in Brussels where she worked with an acoustic monitoring network of cetaceans inside a wind farm in the North Sea and studied how noise produced in this area affects the distribution of this group of mammals.

The second year he started at the University of Galway (Ireland) and is currently developing her final thesis, with Fran Saborido as supervisor, in the group of Fisheries Ecology in which she will study regime changes in species present in the Flemish Cap like cod and redfish and their vulnerability, as a consequence of environmental changes and fishing pressure.