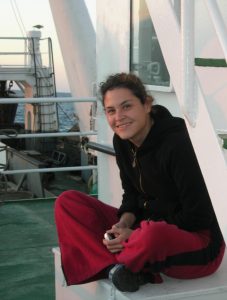 I am Mexican/Spanish researcher specialized in the area of fisheries. In 2002, I obtained a B.Sc. degree in Chemistry, Pharmaceutics and Biology at the University of Guadalajara, Mexico. Later in 2006, I earned a M.Sc. degree in Fisheries and Aquaculture at the University of Zagreb, Croatia. The overall aim of my thesis was to document and evaluate changes in morphometric and meristic parameters of 15 freshwater fish species inhabiting the River Sava in Croatia, which is under significant anthropogenic stress.

I completed my doctorate in 2013 at the University of Vigo (Spain), during which I worked on determining the population structure of the bluemouth (Helicolenus dactylopterus) in the NE Atlantic and Mediterranean, using Geometric morphometrics. This project was funded by the EU Marie Curie Actions (Early Stage Training) and a CONACYT (Mexican National Council for Science and Technology) grant.

I have also worked as a consultant in the EuropeAid project “Setting-up a métier based data analysis and collection system in fisheries”, in which assistance was provided to the Directorate of Fisheries in the Republic of Croatia in the tasks of a) identification of métiers in Croatian fisheries, b) creation of a module in the Fisheries Information System for managing métiers and c) creation of a sampling plan in relation to métiers.

One of my main research interests is studying phenotypic variation of different organisms in relation to a) their adaptation to habitat and b) population structure within a species and/or among related species, with the ultimate goal of preserving diversity and developing optimal strategies for efficient management of living resources. To the present, I have worked mainly with freshwater and marine fish species (Rodríguez-Mendoza 2006, Sequeira et al. 2011, Rodríguez-Mendoza 2013), but I have a keen interest on extending my research to other taxa.

I am also interested in understanding ontogenetic allometry, for example, studying developmental changes that lead to morphological differences among related species or sexual dimorphism within a species (Rodríguez-Mendoza 2011).

At the present, I am collaborating in a project that is investigating the temporal and spatial changes in the coastal community exploited by the artisanal fleet (multi-specific fisheries) in the Galician coast. I am currently working on the identification of the fish assemblages that are captured with different fishing gears and on the characterization of similar fishing operations to define appropriate management units (métiers).