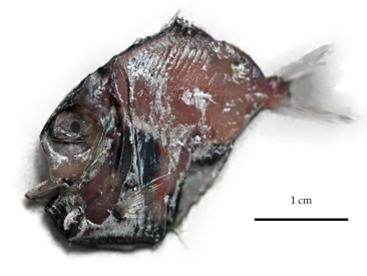 Checklist of marine Ichthyofauna from the Galicia Bank (NW Spain)

Here we presented the last paper published by one of our most active guest researchers, Rafael Bañón:

Commented checklist of marine fishes from the Galicia Bank seamount

A commented checklist containing 139 species of marine fishes recorded at the Galician Bank seamount is presented. The list is based on nine prospecting and research surveys carried out from 1980 to 2011 with different fishing gears. The ichthyofauna list is diversified in 2 superclasses, 3 classes, 20 orders, 62 families and 113 genera. The largest family is Macrouridae, with 9 species, followed by Moridae, Stomiidae and Sternoptychidae with 7 species each. The trachichthyd Hoplostethus mediterraneus and the morid Lepidion lepidion were the most abundant species. Biogeographically, the Atlantic group, with 113 species (81.3%) is the best represented, followed by the Lusitanian one with 17 species (12.2%). Data on species abundance, as number of individuals caught, size and depth are reported. Habitat, distribution and vulnerability status are commented. Moreover, biometric data and meristic counts are also reported for several species. The results obtained showing a high fish biodiversity and a sensible number of threatened species, strongly support the future declaration of the Galicia Bank as a Marine Protected Area.