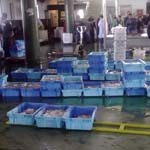 Despite the strong socio-ecological importance for european coastal regions, exploited coastal fish species have traditionally recieved little atention in terms of fisheries assessment and management plans.  However, more recently, these small scale fisheries are of interest within the Common Fisheries Policy (CFP) debate and also and ICES has manifested the importance of gathering information for species subjected to exploitation in EU coastal waters though not included in management plans yet.

In this context, we had the chance to participate in the sampling progam of the GEN-STOCK project along the North East Atlantic coast. Our active participation in the project consisted of facilitating the logistics of sampling at the local fish markets and providing biological material (otholits and tissuea for DNA) from our sample collection.

The GEN-STOCK project, “The use of population-based genetic techniques to identify, delimit and enhance management of stocks of sea bass, pollack and red mullet in the Atlantic, the Channel and the North Sea“, is leaded by our colleague Tony Robinet, associate professeur of the Muséum National d’Histoire Naturelle at the Station de biologie marine de Concarneau. The project is funded at 62.1% (200k€) by France Filière Pêche and at 37.9% (122,3k€) by the French Muséum of Natural History.

The project will last from January 2014 to December 2015 and GEN-STOCK aims to identify and delimit populations (or stocks) of European sea bass (Dicentrarchus labrax), pollack (Pollachius pollachius) and red mullet (Mullus surmuletus), and the genetic state of these stocks in the Atlantic, the Channel and the North Sea. These analyses will provide basic knowledge for the management of the exploitation of these species in the zones identified by the CIEM.

The regional sampling is conducted in the CIEM range of species (from the Azores to Scandinavia), mainly on landed specimens; based on 30 specimens/zone in 18 zones in the CIEM area. The OP “Pêcheurs de Bretagne” (Breton fishermen) and “Cobrenord” are willing to collaborate for collecting samples from their fishing zones and the other zones will be collected from fish markets. An analysis of the diversity of the genetic structure (microsatellite method) will be conducted on samplies collected.

The project propose to use different molecular markers in order to bring to light the structure and the genetic diversity present in the concerned CIEM zones. Summarizing, the research team wish to reply  two main questions: i) is there genetic structuring of these three species in the Atlantic-Channel-North Sea? and ii) how are the flows between the likely different sub-populations?

This knowledge is essential for establishing the sustainable exploitation of these species.

For more information regarding this project see details in the following link: GEN-STOCKS pdf (english).